I was nestled in my mosquito-resistant cocoon around 8:00pm when Amelia called to ask if a guest could stay at the guesthouse. I said yes and shortly after she and Annie showed up to make the bed in Room 2. Room 1 is currently being used to store some of my more precious remaining cargo that was shipped here; Room 3 is my room; Room 4 is being used by Sam whose girlfriend left a few days ago. The man came and left quietly by 7:00am…easy income for the school!

I awoke trying to get in the mood for work and decided it would be a good day to photograph students for their sponsors. I first wanted to check in with the construction gang. In doing this, my plans were changed for me because Lavela needed supplies and John 2 is still with his family after his mother’s burial. Lavela and I jumped in the truck and as I drove up the access road hill, the truck lost power and died. I tried a few times and it wouldn’t start. We called Sam to check it out and as we waited I noticed a cracked rubber fuel line leading from the filter area. When Sam arrived he noticed someone had bypassed the filter and sent it only through a condensate cup so I’m sure dirt was clogging up somewhere. He tried bleeding the line but no luck.

I took his Land Cruiser and drove to get the mechanic. Kortuma wasn’t available but some of his underlings drove back with me to Iron Gate where his son was finishing work on a broken down vehicle. We all joined forces and drove to baby Foton. He did more bleeding using a different method than Sam and successfully started it. Since the fuel lines were severely cracked from the aggressive Liberian environs, I decided to get the fuel filter and lines replaced immediately to avoid another problem. The gang of mechanics and I drove to the shop and repairs began. Meanwhile Lavela had been waiting for the truck to haul wood. It was nearly 11am before the truck work was completed and all I’d done for the day was attempt to drive into Gbarnga. Always something making me “wait small”.

I eventually got back to campus and decided to eat an early lunch and regroup for student photos after lunch. The kids are so cute it was easy to goof around with them as each stepped to the chalkboard and stood next to their handwritten name and student ID number. Here’s one example of an irresistible smile. 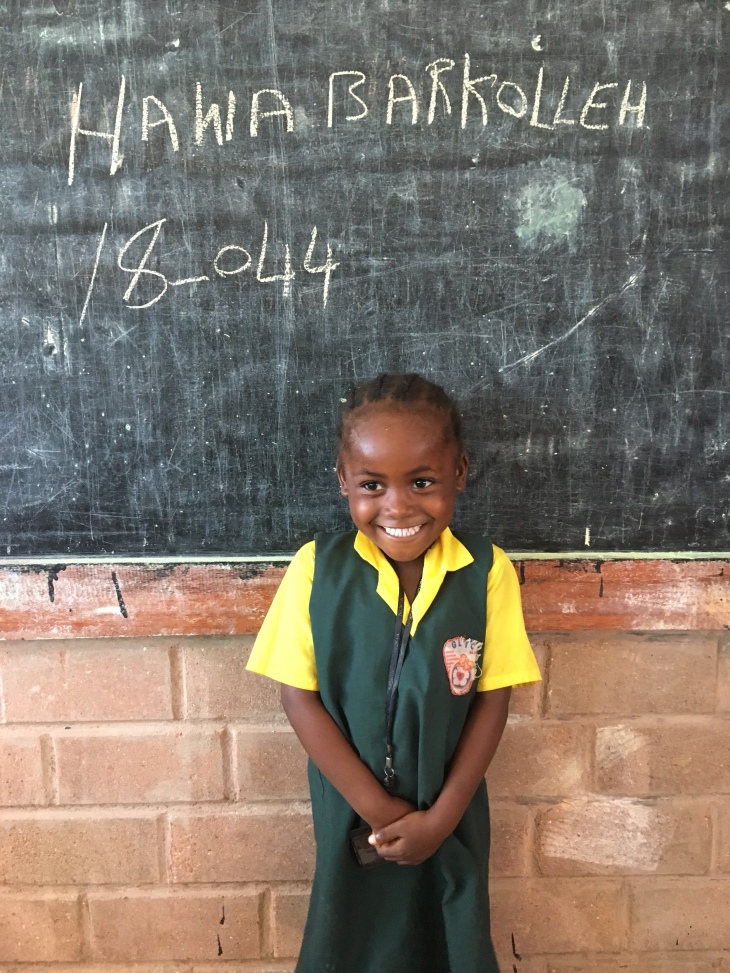 After the photo fun was done, I made a call to the septic contractor through Phebe and found a price of $600 for a 3,000 gallon honey wagon to come from Monrovia to pump our tank. I texted my American sources (my parents) for a sanity check on this figure and discovered it wasn’t off base given a neighbor of theirs recently had a 1,000 gallon pump out for $200. I may schedule this for after I leave so I don’t have to have that lingering odor be my last memory of GLTC – and I’m afraid to see the process outside my guesthouse window.

Given our septic theme, it’s only fitting to move on to plumbing. The feed storage building will have a small bathroom for the poultry staff and to promote good hygiene and biosecurity measures when dealing with our birds. The rough plumbing exited the concrete work and required some finishing. I needed to connect a couple of drain lines and run it in a trench beyond the end of the building where it will one day go into a small septic tank. The trench was dug this morning so I hiked up there with my PVC glue and miscellaneous fittings and went to work. One of my boys, along with Annie, assisted me in holding pipes as I cut, manipulated, and glued them. All went smoothly so the boys backfilled the dirt and I moved to electrical.

I extended the solar from the first chicken house into the second pen. I could only go as far as getting power over there and wiring up a switch because the construction crew hadn’t put the final touches on the trusses due to lack of 2×4’s. There are a series of them that run the length of the building which get nailed to the trusses, sometimes referred to in the US as a “strong back”. This is centrally located so a good place to dress my wires and put the light sockets. For about $350 (including switches, electrical boxes, lightbulbs, and wire), each pen will have two independently switched 7-watt DC lights, powered by a single 90 watt solar panel ($150 in Gbarnga) and a 100 amp hour gel battery ($125) with its 50 amp charge controller ($40). Annie was watching closely during installation so I had her put the finishing touch on the switch. 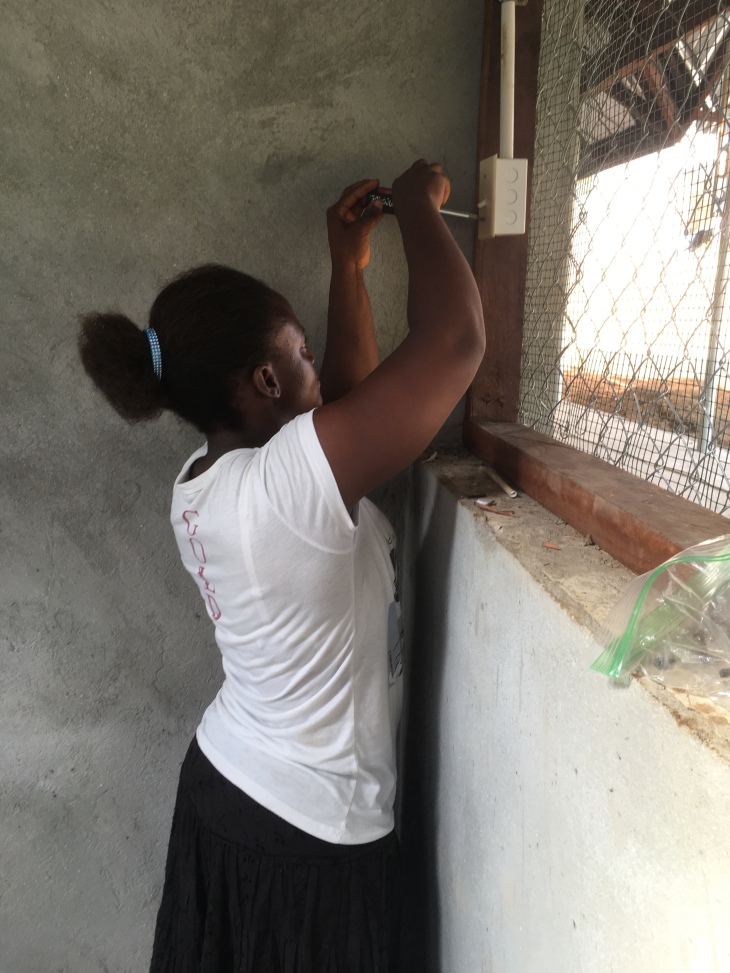 In the background of our work was the sound of men straining and yelling commands as they hoisted the very large trusses onto the roof of the feed storage building. Below them, a small group of mostly women began the task of puttying the block joints throughout the building. 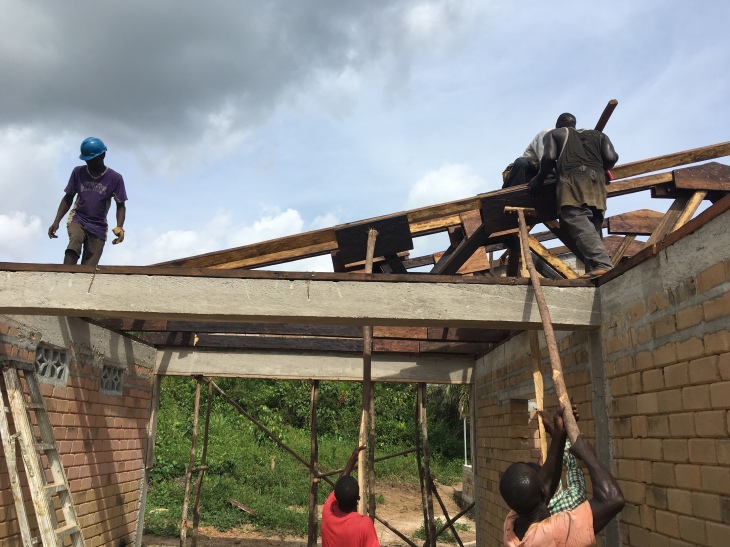 One of the things I enjoyed was hearing workers banter about volleyball as they pounded nails, cut wood, and hung chicken wire. They really enjoyed the game’s debut yesterday and were planning more play after knock-off time today.

And finally, a chick delivery update: the next scheduled hatching date means we won’t get our day-old fluff balls until June 5th. Bummer.