Saturday seemed to fly by with project work and assisting James Woods make contact with the local villagers with whom I was friends. He has enlisted one of the boys, coincidentally named James, to be his guide and carry his personal possessions through the bush. Both Jameses appear to be enjoying each other’s company. Another woman with a 1-month old baby allowed me to hold him. The baby has no name because families like to give the child a name with meaning that fits some characteristic they witness during the first month or so…it could be how they act, their size, or skin coloring. I held the baby boy for about an hour. When the baby was waking, I decided to call Kathy to let her hear him, plus one of the other women said she had a baby song to sing for Kathy. I’m not sure Kathy understood half (or even 3/4) of what they said but it gave her a chance to experience some of the English language barrier that exists.

James told me on Friday that he wanted food to be served after Sunday’s community meeting so I spoke to one of the women, Sando, who has cooked for the workers’ lunches. A series of women take turns being the primary cooks and they appear to work in threes. Sando said it would be no problem for her to cook, all we needed to do was go shopping in Gbarnga for supplies.  Around 4:00 we took a ride and I got to see parts of Gbarnga I hadn’t been in before…the “back streets” of Gbarnga where the “real” marketplace exists. Narrow walkways between ramshackle wooden stalls selling everything from food to fabrics and soup to cola nuts. I also found where frozen chicken and fish are purchased…was never quite sure what that store sold each time I passed it.

With the cooking arranged, the town crier getting the word out, and several key leadership people contacted by James, it looked like we were well organized for the next day’s event. James and I attended worship (which for the past 2 weeks has actually been a Bible Study series instead of a traditional service) at the Deanville preaching point. A cute, quiet little girl wanted to sit with me and she cuddled as if I were her father-and I loved every minute of it! 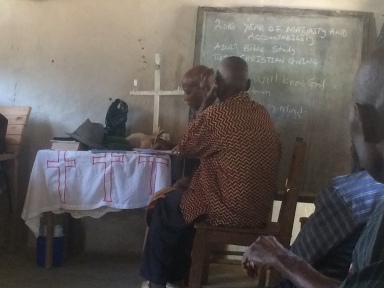 Afterwards, James continued his community survey by having family members remain after church so he could interview them before everyone scattered. While he took advantage of that situation, I took advantage of photo ops with the kids (as shown in my previous photo post “Just Kids”). The funny thing was when I noticed one of

the cute little girls had a fuschia colored dress that perfectly matched a flowering plant in the yard. I started putting flowers in her hair and every child (including boys) wanted flowers. They were so excited. These kids are starving for playtime attention from adults.

After the interview session, James and I had a brief “rest” time back at Phebe before needing to return to the work site for the meeting. We started around 3:45 (which isn’t bad for Liberian time). Pastor Isaac Dowah (assistant to the Bishop) attended along with evangelist Sumo, the Bong County Assistant Superintendent for Development Anthony Sheriff, a key person from the Bong County Community Health Center (can’t recall his name), and Henry Konuwa from the Gbarnga Rotary Club. There were 75-100 people from the surrounding Deanville and Green Farm villages (babies to elders that could barely walk). James did a great job of sharing our message of having this school be community-owned with the conversation switching back-and-forth between English and Kpelle. The Q&A period at the end revealed a bit about their concerns (is this a free school, do you have to be Lutheran to attend, etc.). All in all, I was very happy with the turnout, their attention, and participation. After remarks by the “dignitaries” and a closing prayer, food was on everyone’s minds. 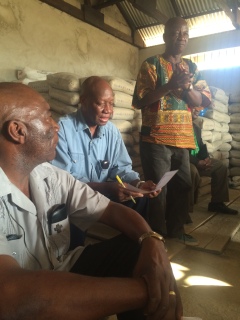 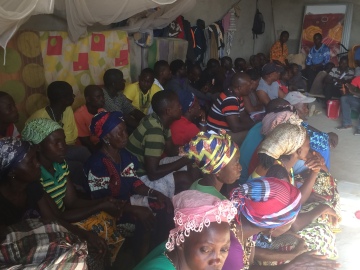 Which brings us to Monday morning’s phone call, “Mr. Jon, we have a problem at the work site you need to address.” I was in Gbarnga with James trying to nail down a commitment from Anthony Sheriff regarding getting the county road into our property started (unfortunately he had left for Monrovia after Sunday’s meeting). While fruitlessly waiting for Mr. Sheriff, we decided to visit nearby St. Mark’s School to survey the principal. It was there that Sumo approached me to explain details of the “problem” at the work site. A rift had developed among the women regarding who cooked Sunday’s post-meeting meal. Apparently I did not inform the “head mothers”, Sonnie and Quinta, who have power over who cooks and when. Unfortunately a bit of gossip fanned the flames into a much larger fire of anger as some were told that Sando (remember I approached her) came to me, telling me she was “the best cook in Deanville” and I should use her instead of the other women. My mistake was not knowing the rules of the “head mothers” and approaching them first. When I heard all of this, I told Sando that we needed to meet together (Sando, Sonnie, and Quinta) so I could apologize directly to all of them.

Our sawyer in the bush had arrived to inform us that some wawa was ready to be picked up. We took baby Foton on yet another bumpy ride to haul lumber. When we returned and unloaded our booty, it was time for our noon-time conflict resolution session. It started when all three women accompanied by Father Sackie (a church elder who I like very much) and another church elder assembled in the shade of the warehouse wall. I started the conversation with my understanding of the situation and how it evolved to insure I had the correct story. Father Sackie translated much of the discussion into Kpelle so there was no miscommunication. I acknowledged my mistake in not contacting Sonnie and Quinta, apologized to each, then pulled some cola nuts from my pocket to give them. I learned this was a sort of Liberian “peace offering” in situations like this (also used as a “thank you” and “encouragement” gift to volunteer workers). Everyone laughed at/with me because they were surprised I remembered the nuts-or did they think I was nuts? mmm? Father Sackie felt the whole issue was resolved and should be forgotten now that the “mothers” had gotten the respect they felt was lacking. (Yes, Kathy, a woman wanting R-E-S-P-E-C-T…how unusual!).

About 1/2 hour later, Saah arrived with our Kenyan block trainer, Simon. We walked the site so I could show him our preparations. He examined the soil we had begun sifting and felt we needed to dig deeper for “better dirt” with a slightly coarser structure. He was tired from a long trans-African flight so I went back with him to Phebe to get him situated. I wanted to get food for him and asked what he typically ate…no rice or starchy foods…uh oh! That’s all they eat around here is rice and starch! I went to the marketplace across from Phebe and gathered as many veggies and fruits as I could find.  Not much variety, but I think he was able to make something that satisfied him.  This will make lunch a little more difficult since I had planned to simply add his name to the daily plate count for “rice and soup” with the other workers.  We’ll see how it works out tomorrow.