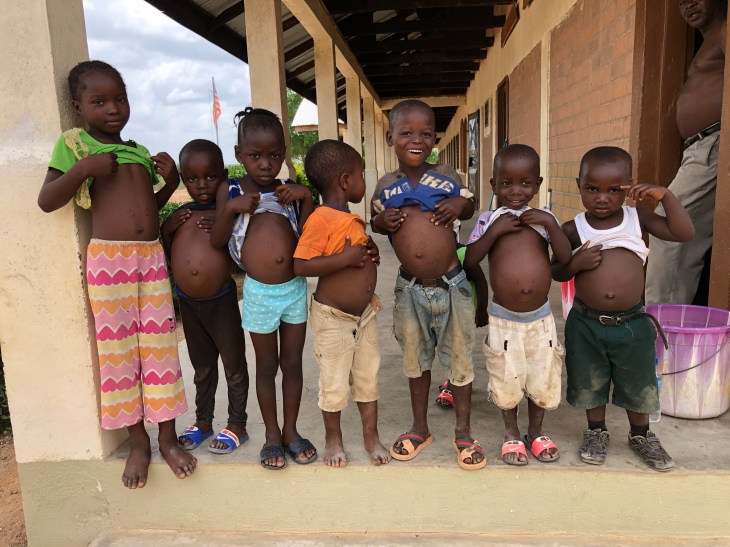 Kids of a certain age are easy to entertain. This group gathered after I drew a smiley face on the stomach of one child, using his outie bellybutton for a nose. I immediately had a line wanting the same thing. They proudly pulled up their shirts to pose for this group shot.

That was the fun part of my day. At the other extreme was a long-neglected leak repair. For 2 years I’ve been telling them there’s a leaky pipe under the cement floor by the boy’s bathroom because the foundation wall has been perpetually damp. Unfortunately, self initiative is not a strong suit so some things don’t get accomplished until I simply say “do it”! We got a plumber who was the former trade school teacher of our electrician, Edwin Suah. He and his two apprentice helpers chiseled out the toilet (they cement toilets in place here instead of bolting them to the floor) and busted through both the cement floor and the adjacent exterior block wall. We uncovered a cracked PVC elbow in the supply line to the toilet. We had to run around getting pipe fittings, cement, plaster, etc. He’ll be back tomorrow to finish up. So far, no leaks.

Up at the poultry farm, electrician Edwin installed a lighting timer I brought from the States to keep a consistent 16 hours of illumination needed to maximize egg production. After a few days of testing, we’ll install more in the other pens.

Last week I spoke with our third poultry worker, Mamie, to get insights about how things are going. As mentioned earlier, today was our scheduled poultry staff meeting. I discussed a variety of things ranging from my concerns about the depth of the saw dust bedding material to lax biosecurity since I did not observe them washing boots between pens. I offered suggested improvements such as how the water drinkers were elevated on overly large cement blocks which was promoting spillage and birds pooping onto them. I brought up unreconciled disputes between the three workers regarding feed amounts, egg pricing, work loads, and lack of collaboration. In true Liberian style, some topics exploded into heated discussions alternately shouted in Liberian English and Kpelle. I was happy to help navigate them to come to resolutions on most issues, including a monthly staff meeting time and day. We also discussed the idea of starting a corn farm for feed support. One of the great Liberian lines that came out was “gardening is very jealous”. This means it requires a lot of time for weeding, watering, and caring for it and it doesn’t appreciate if you forget about it.

I visited our restarted adult literacy class this evening. We’re back to two classes (beginner and advanced) with about 15 students. The beginner class has named themselves the “business class”. It will focus on:

Future classes may include “village savings and loans” as well as “health – understanding medications”. All of it seems very practical and should hold the student’s interest because of the real-world application.

The “Uncle Jon” is leaving soon money requests have already started. They range from money for trade school and university tuition to funds for a mattress and mechanics tools. On top of that are requests for laptops and cellphones. It drains me.