It’s hard to believe that a week from now I’ll be seeing chicks in our poultry house. Tumamee and I

went to the BRAC office in Gbarnga today with a pile of cash to pay for 250 day old chicks, three 50kg bags of starter feed, and thirty 50kg bags of “grow feed”…our first flock on our way to poultry (and hopefully not paltry) profits.

Since the chicks need 24 hour lighting for the first week or so, I purchased a solar panel and battery to go with s small charge controller we already own in order to provide solar powered illumination. Zinc started going on the roof today so I hope to install the solar by Thursday. 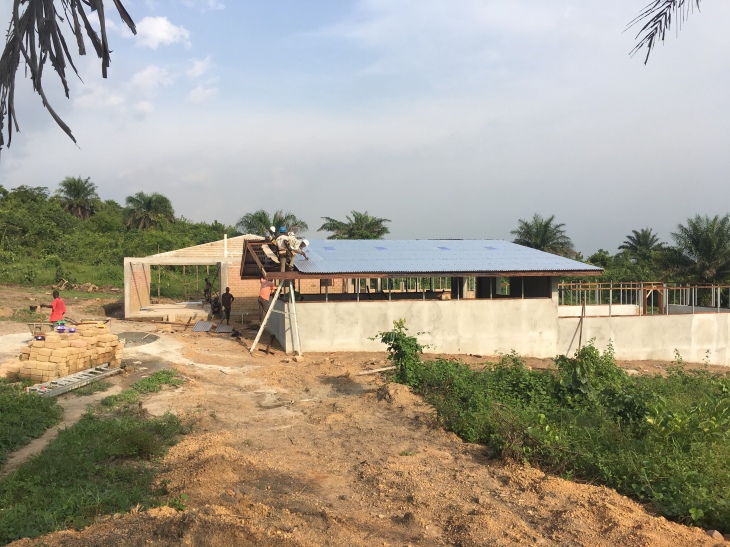 From the outside, it may look like a lot of progress, but this project has been frustrating for me. One if my primary issues has been having materials, specifically wood, on site to keep the workers moving efficiently. The fact that I’ve been here for a month and the trusses just got constructed and put on half of the build last week is much too slow. Lavela has chosen to get the planks from a sawyer up in Lofa which requires an overnight trip to haul the wood. In sharing my objection to this, Lavela did not appear to be receptive to alternative suppliers. I heard from two workers that they felt dissatisfied with how work was progressing. I decided yesterday afternoon to call Sam Bundo. Sam retains the title of head contractor despite the fact that he’s not managing my projects. Lavela and crew still see him as their “boss man”. I have a lot of respect for Sam, his construction expertise, and how he deals with people. Sam offered to come visit to help resolve the issue that “Mr. Jon is not satisfied.”

Sam arrived this afternoon around 3:00 when Lavela was off with John 2 getting a load of crushed rock. When he returned, we sat together with Sumo in his office and had at least an hour discussion, led off by me but mostly run by Sam. There was an interesting dynamic between Lavela and Sam based on them verbalizing things like “the student is not greater than the master”, helping to reaffirm the hierarchy of their relationship. Sam methodically outlined Lavela’s shortcomings on this project with an emphasis on his poor work plan. It got uncomfortable at times but Sam had a very good grasp of the situation and eventually a consensus plan on how to move forward was formulated. I hate conflict.

Meanwhile, the adult literacy class had gathered in their classrooms and I had the pleasure of flipping the light switches on now that the solar is working. This was followed by applause and excitement. They are changing the class time from late afternoon to 6:30-8:00pm effective tomorrow now that they have lighting. Perhaps more will attend as this shouldn’t interfere with most income-generating work time.

One thought on “1 week countdown to chicks”