Sumo told our guests of a new place he wanted us to visit which he described as a waterfall and a place where people go for picnics. This sounded appealing to my guests so we packed in the Land Cruiser and Saah maneuvered us north on Gbarnga Highway. Becky wanted to print some photos to give to families before departing the next day so we stopped on Broad Street at a small market that had batteries out front and a photo print shop in the back. Of course, the man running the photo printing wasn’t there so we decided to do a couple of other errands and return in 10 minutes. This gave Becky and Kathy a chance to meet the “famous” Mr. Barbar. After some conversation, a few juice drinks compliments of Mr. Barbar, and a small purchase (including a “whipper” for Kathy to take home to Maine…don’t ask!), we were on our loop back to the photo market where the files were transferred from the USB stick and we were on our way to the waterfall.

Meanwhile we had picked up Sumo’s friend, Pastor David Mychenburg (yes, he’s a Liberian despite the non-African last name) who joined us for the ride. The dusty road became more rutted as we got deeper into the bush and the scraping of branches on the Jeep’s sides implied an end to passable roadway soon. After reaching a small opening and a steep incline, we were greeted by a family of goats, a few women busting boulders into crushed rock near a river, and a large partially completed multipurpose building…in the middle of nowhere! We climbed out and headed down to a river which had the typical satisfying rumble of rapids but whose coloration did not call to me to indulge in a plunge, despite the heat and humidity. Apparently some westerner is funding this building, which will incorporate a restaurant, in an effort to make this area a “destination” for picnicking and swimming. It’s just so far out of the way I have a hard time envisioning many people making the trek. We visited with the rock crushers and I persuaded one of them to let me try it. They got a good laugh out of it. 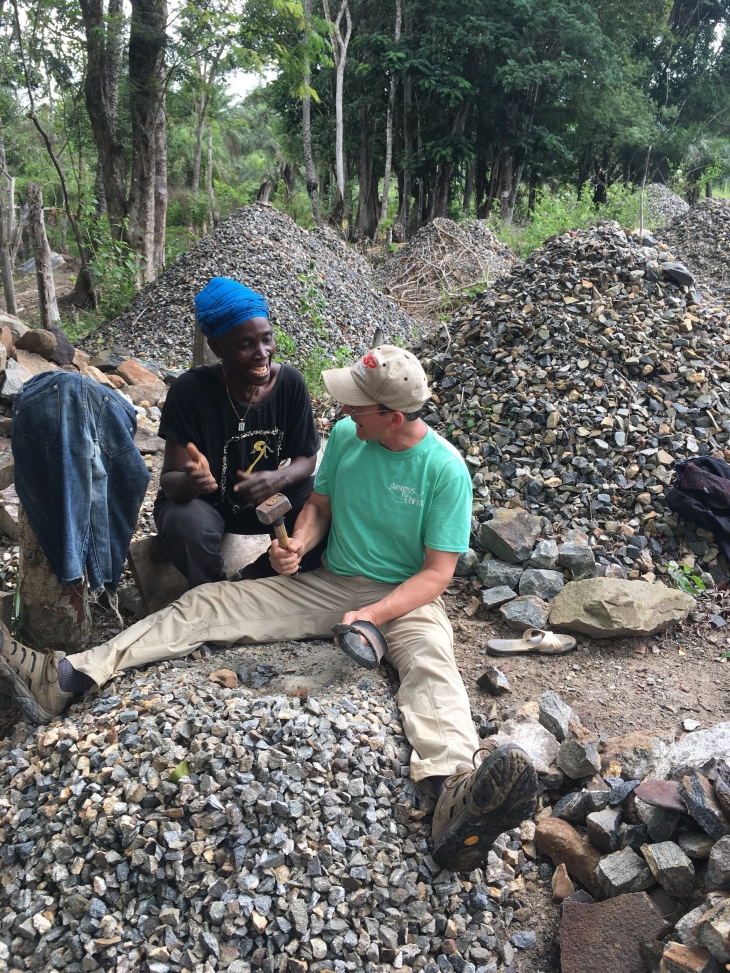 With little to see, we were again off to Gbarnga to pick up the photos. With prints in hand, we attempted to return to campus for a noontime staff meeting but made a quick stop at Pastor Mychenburg’s church school. This gave my guests yet another view of schools with more “rustic” facilities.

It was already past 12:00 so I woofed down my lunch and fumbled through my notes walking to the classroom as our 18 staff members gathered. I had called the meeting to share some positive feedback from various outside sources, including from one of our guesthouse guests, and to distribute notes of appreciation from Kathy (yes, this one is my wife). Several times they clapped when I shared my feelings about how special they are, how different our school is, and how important the work they’re doing is – not only their specific jobs but the love and welcoming they have for everyone that steps foot on our campus. I expressed a few minor areas for improvement but kept it focused on the positive encouragement.

As the meeting concluded with a few questions, Kebbeh (the K1/K2 teacher) requested a post-meeting discussion with just me and Sumo. After a concluding prayer, the three of us met and Kebbeh announced she would not be returning to teach next school year. Although surprised by the timing (she’s in the middle of some training classes which are being financially supported), I wasn’t surprised by her decision. I’ve had an uneasy sense since she was first hired that there was total dedication to the job on the surface but not 100% in her heart. This leaves us with a bit more planning for fall classes and a shorter deadline since we begin our Liberia Reads intensive training in July. 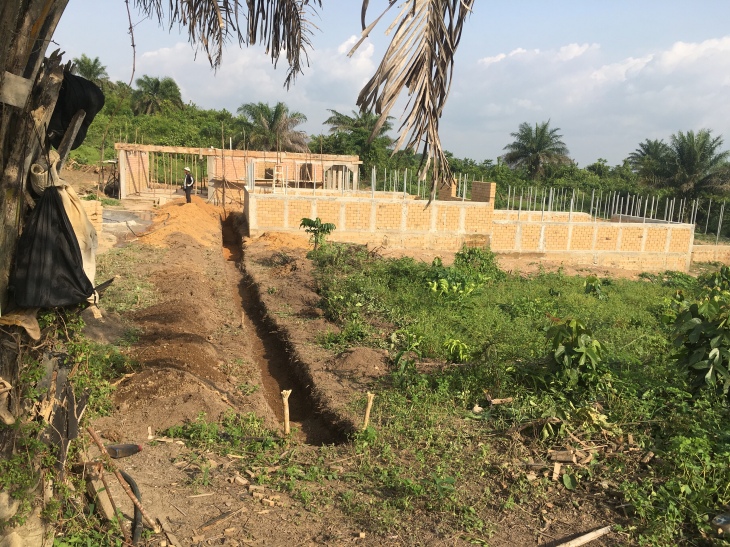 The rest of the afternoon had me running – physically and mentally – from poultry construction and water line trenching to visitors needing attention and solar panel frame welding issues. Because of the family gathering that’s still happening at Moses’ house after his grandmother’s burial (today was the “feast”), some of them have come to see Uncle Jon who has been helping Moses over the years resulting in having more visitors than usual.

In another of my many diversions, I’ve been wanting to try micro loans to help our Deanville community members. Last November, Annie asked for a loan to buy ingredients needed for selling baked goods. I declined personally but said I would look for someone who might be interested in helping. A friend of mine from Mt. Calvary was interested so we developed some simple loan terms modeled after an organization called Kiva that’s been crowdsourcing micro loans for many years. I sat down with Annie to disburse the $50 loan and discuss the details. It was important to me that she understood the finances of her little business. I walked through writing down every expense associated with producing her products which included donuts, cookies, and meat pies. We listed ingredients for the dough and meat pie filling then calculated how long they would last (1 bag flour = 1 month, 1 pack of yeast = 4 days, etc.) ultimately determining a production cost per day. She knew how many of each item she could sell daily (30 meat pies, 60 donuts, 50 cookies). Armed with this basic information, we did the math together to calculate her projected profit/loss. Fortunately, this is a profitable proposition with Annie netting $659 LD/day (about $4.75 USD or over $100 per month). This is good money for many struggling Liberians. She seemed to understand the process and was happy with the income potential.

Later in the day when my guests and I were sitting in the guesthouse screened porch, Moses Giddings (one of security guards) came over. I discovered that Chief Dean is his stepfather. Conversation led to hearing his experiences during the civil war. He recounted times when he was about 18 years old and rebels tried to get him to fight in the war. He refused so they would beat him and lock him in a barrel. Imagine the temperature inside with this Liberian heat! He talked about how our current GLTC campus property was part of a large Charles Taylor fenced and lighted compound where Taylor kept imported wild animals like lions (war lord bravado I guess). Ironically, Moses would wash cars for the Taylor rebels to make some money since jobs were nonexistent. Many times when he fled from rebels into the bush, he would survive on paw paw (papaya) and talked how God protected him and his mother. He repeated many times how he hated (hates) war and refused to hold a gun. Rebels would try forcing him to hold a gun and he would just drop it (and run away when possible). He likes any president of Liberia when there is peace and is thankful for his security job at GLTC which has allowed him to save and build a new house. Moses shared his appreciation for me in a way I didn’t expect. He said, “Jon comforts children and speaks good to people. When he comes, my whole heart is satisfied.”