In an ongoing process of shepherding the school towards self-sufficiency and self-reliance, I discussed with Sumo about some plumbing issues in the school restrooms and navigated the topic to find what prevents them from repairing these problems in my absence. The end result was trying to get a portfolio of reliable tradespeople for various maintenance tasks. We have a good electrician, a welder, carpenters, and masons….now a plumber. A young lady who is just completing job training came yesterday to discuss the job. As with most trades workers I’ve met, she has no tools of her own. I told her this was a requirement and suggested her payment for this job could be in the form of tools and money or just tools depending on the cost of what she needed. She agreed and I gave her money to buy a screwdriver, pliers, and an adjustable wrench. She arrived today for this test run to repair some fill mechanisms in a couple of toilet tanks…not a tough job but we could get a sense of her skill level. Her quest for those three basic tools was not successful because no one in Gbarnga is selling pliers. I had an extra set purchased in Monrovia so I sold them to her. I observed her working, offered suggestions, and tried to see if she understood the “why’s” of doing things a certain way or if she just did what she was told. It was a slow process and difficult for me to not rip those pliers from her amateur hands just to get it done…but I listened to the little voice of Kathy telling me to not butt in (or was that the big voice of little Kathy…) either way I mentored from afar except at one point when stripping the PVC fitting in the concrete wall became a distinct possibility, then I had to intervene. I think she’ll be fine for small repairs but not much more complex. It’s a start.

Taking a break from some tile work,  I took the opportunity to kid around with Amuchain (her reaction caught in the photo below)… 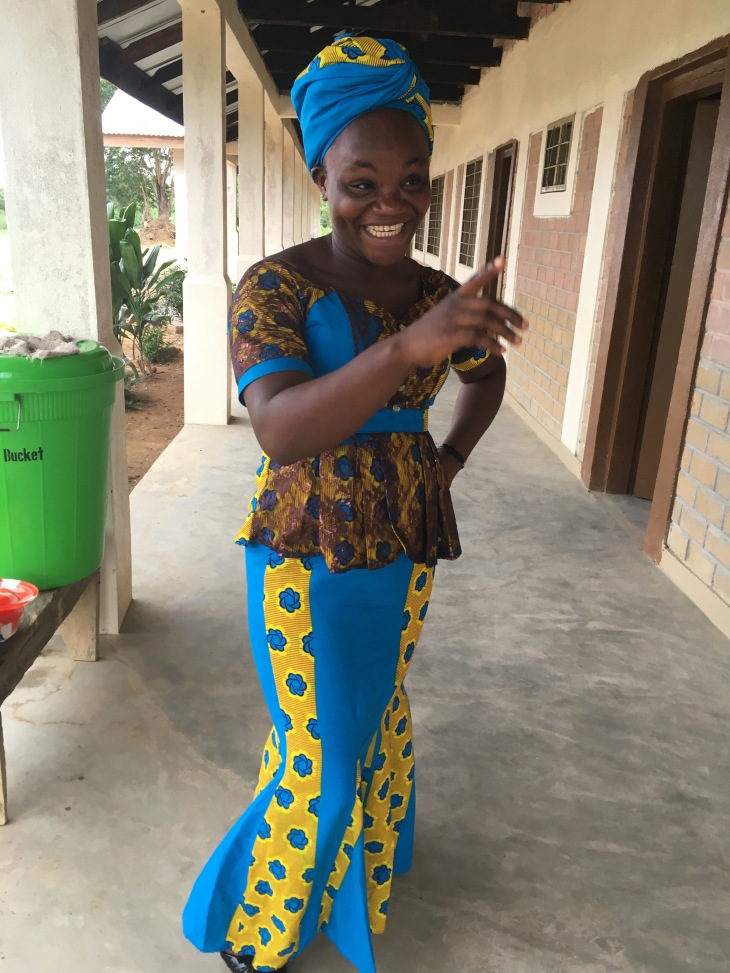 then play a bit of kickball with my little friends during the ABC class recess time. It eventually turned into a line of 30 students having me pitch the ball so they could kick it and watch my exaggerated reactions. I had a blast but realized I had no retreat from the heat and now had worked up a sweat that would last the rest of the day. I checked up on John 2 who I enlisted to rehab some of the wheelbarrows in disrepair in preparation for the next construction work – welding leg supports, reinforcing metal frames, and replacing worn axle bolts.

Before I headed “home” for lunch, I stopped in to say hello to the cooks. I thought I’d share photos of the 8 x 8 foot welded chimney assembly and the women “plating” the numerous rice meals. The new kitchen is getting a workout and is especially appreciated on rainy days! 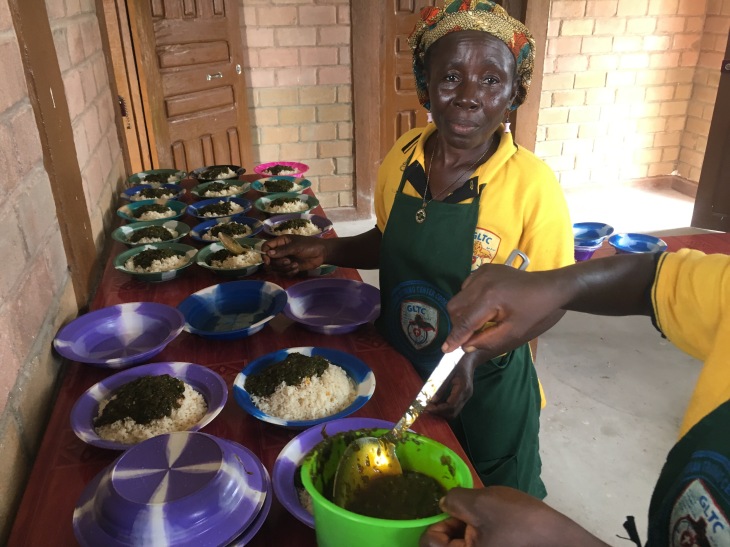 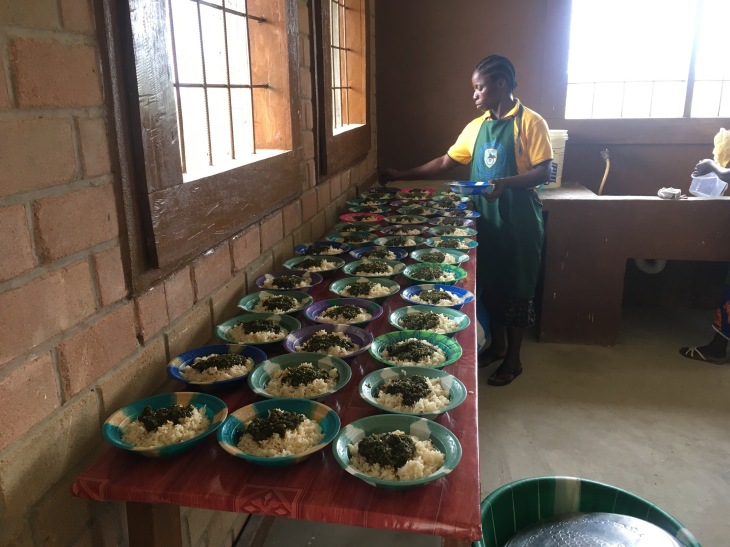 With the truck back in action, I headed to Gbarnga for a small shopping trip but primarily to the Bong County government office. It hasn’t been until this year that government services (drivers licenses, business incorporations, etc. could be done anywhere except Monrovia. It’s there “government decentralization” initiative. Our school business registration expires in early November so I thought I’d give the new decentralized process a whirl. When we finally got escorted to the proper office, I explained my request. I was told that the $50USD renewal fee also required $20USD for transport and processing in Monrovia. I went into a bit of a challenge mode about how decentralizing should mean the same services at the same cost no matter what county or service center you go to…assuming that once again the ever present hand of corruption had its ugly grip on the decentralization effort. The next hiccup came when I gave him our existing documents where I’m listed as one of the incorporators along with Hawa Norris and the remaining Liberian board of directors. Because this is a Liberian “local nonprofit NGO” he didn’t want me being the “local” representative doing this renewal. He even said directly it would have been better if Amelia (who had accompanied me) would have presented the documents instead of me. So I gave them to Amelia and she re-submitted them! Eventually I offered to have him speak with Hawa (who has political clout in the county) to appease his pro-Liberian leanings. Hawa told me to just give the fee and the extra $20…so I capitulated…yet another chink in the system.
Back in Deanville, I dropped off Amelia who told me to pick squash from her farm along the access road. I enjoyed some deliciously fresh stir fry and pasta tonight. A rumbling thunderstorm has engulfed the guesthouse as I lie under my mosquito net writing this entry. The cool breeze feels refreshing after a sweaty day of work and kickball.

2 thoughts on “Decentralization (sort of)”