Yesterday afternoon I had a meeting with Sam Bundo, Lavela, and Sumo to discuss some issues of concern for Sam.  If you recall from way back last year, Sam is actually the boss man of everyone and Lavela is one of his head skilled builders.  Sam left part of his team with Lavela as project leader back in December 2015 to do our construction work.  Sam felt I had purposely left out some of his “suppliers” for ones of my own choosing (i.e., picking a different rock crusher, wood sawyer in the bush) because the price was better.  I tried to explain I only went by Lavela’s suggestions because I don’t know any better in Liberia. If wood needs to be supplied and one guy doesn’t get it done on time, we’re moving on to someone who can deliver.  He also felt I had not appropriately compensated him for the good work they were doing.  There’s bit of a cultural divide here.  Besides paying Sam a wage, he is entitled to something “special” as boss.  One item I bought him last year was a controller for the solar panel on his house.  This apparently wasn’t sufficient as he was feeling slighted.

There was also a miscommunication regarding the half of the crew working with Sam.  I was told that Sam would split his crew so two projects would happen simultaneously through February, then both teams would come back together on our school to have more skilled people that could complete the work faster.  I remember having a phone conversation with Sam as the time approached and I’m sure he asked if I was “satisfied with the workers at our site” and I’m sure I said, “Yes!”  Unfortunately, he interpreted it not as meaning I was happy with their workmanship, but as meaning I was happy with the crew we had and didn’t need his other men.  After a series of clarifications and apologies for misinterpretations/miscommunication, I think we came to an amicable conclusion.

Today had a less than amicable ending…I spent most of it in court (the one I was brought to for 2 days earlier in the year).  Some time in May/June, two men broke into our pump house stealing equipment and into the guesthouse stealing wire.  Members of Lavela’s crew caught the one man who attempted to sell some of the electrical components to a friend who is an electrician.  He tipped off Lavela who arranged to meet him.  Long story short, they caught one man and brought him to the police (but only after stripping him naked and tying him to a tree). The other man fled and has not been seen since.  Today was the trial so Sumo needed an itemized list of what was taken and requested I attend the court proceedings scheduled for 10:00am.  If you’re thinking, “This is Liberian time…no way will it start at 10:00.”  You are correct…the attorney for the “alleged” criminal arrived at 2:00pm.  Sando attended the trial and I learned that Liberian men do not allow women to enter the courtroom wearing pants — they have to wear a lapa, skirt or dress.  Since she was wearing pants, she had to find one of the cleaning ladies in the building to loan her a lapa.

After a very brief introduction around 2:30, this attorney explained he had not received a copy of the evidence file as agreed by the plaintiff’s side, thus the case has now been postponed for 2 weeks.  Meanwhile, the two lawyers argued 15 minutes about who should write the receipt indicating the defense received a file copy.  They looked like two children — “I’m not gonna write it, you write it.  No, I’m not gonna write it, you should…..etc.” With most of the day wasted and my cold still wearing me out, I headed back to Phebe for an early dinner.  I’m heading to Monrovia tomorrow so I’m also going to bed early.  I hope to sign paperwork to get us registered as an NGO and pickup supplies at Eagle Electric.

Another short blog without photos…sorry.  Well, how about a photo of a newborn baby girl, Kathryn, named after my wife (or as they call her “Sis Katrin”) to end the day. 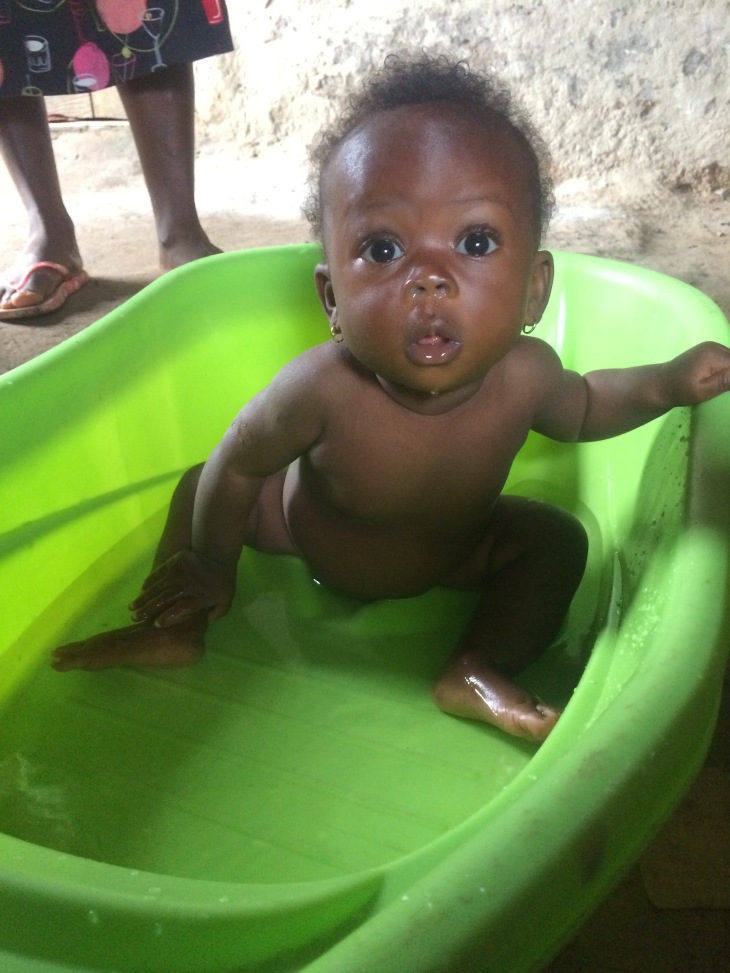