Our trainer, Simon, has continued in a very methodical approach to teaching our group. Some are experienced masons (with ingrained bad habits) and some are newbies. On Saturday, the team was given a leader from among the group with the challenge of producing 1,000 blocks in a day. They worked well together until a moment of disagreement in the afternoon left the machine running, a pile of unmixed soil and concrete, and production at a stand still as the testosterone went into high gear. Fortunately, is was short-lived and they were able to produce 1,036 blocks in 8 hours. Just after the machine was turned off, 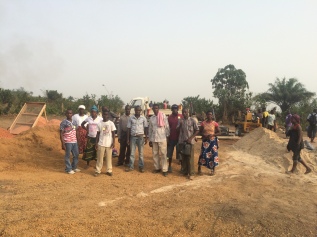 a contingent of around 30 people came to visit (only a handful shown in this photo) with Pastor Moses Jeogbor who was conducting a parish-wide conference of evangelists and church leaders. They were very interested in the project so I did my little dog-and-pony show by explaining the scope of our school project, potential impact of the new block machine, where the wells would be, etc. etc.

On Sunday, I went to service at the Deanville preaching point. Here’s a photo of their Sunday School class meeting outside under a shade tarp on benches made of tree saplings. After service, I took a walk with Sumo to confirm the new well location is actually on the school property. I also asked if I could get some

new cooks for this coming Friday so I could invite the various cooks from Deanville that have been preparing food for our workers. There are 6 teams of 3-4 women that rotate throughout the week. I thought they might enjoy a meal without having to prep, cook, serve, and clean up as a way of showing my appreciation for their work.

Today we moved onto the actual school foundation to learn how to properly lay the blocks, particularly the most-important first course. The morning consisted of demonstrations of various layouts and construction tips. If only my Liberian builders had been able to play with Legos as children… The block building method used with the Hydraform interlocking blocks is a lot like making a large-scale Lego project. Corners and wall intersections work the same way except they weigh about 15 lbs. more per block.

Leading up to lunch, they were broken into 4 teams and told to build a small house 6-block courses high with two doors. Some struggled more than others and they graded each other’s efforts as errors in building technique were discussed.

After lunch we took the important step of laying blocks for the first actual classroom. The Hydraform system entails using mortar on the first course of blocks then dry-stacking the remainder up to the window lintels. Leveling the first course on our foundation took some time because it had some straightness issues. By the end of the day, the perimeter of the first room was complete. Tomorrow should go much quicker as we begin the dry-stacking process.

The kids are constantly trying to keep me interested in them, so they occasionally bring unique foods to show me. Here’s an unusual fruit that I’ve never seen before (can’t remember the name): 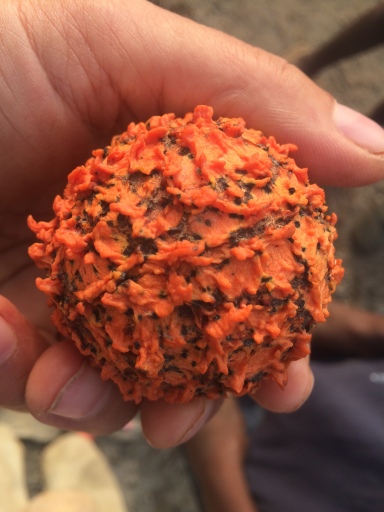 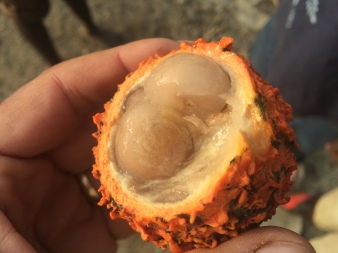 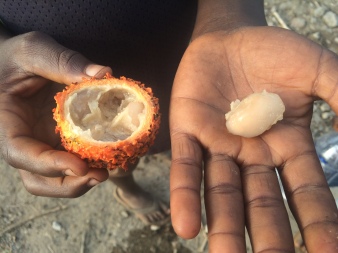 I also made the mistake of telling a couple of the boys I would buy some bags full of small rocks to use in casting the concrete door and window lintels. The next day, not only did the boys have bags full, the community heard about it and one woman had filled 31 bags. I bought them all but had to keep telling them to stop filling bags which I found lining the dirt access road to the property. Because they’re found all along the dirt roads and pathways, they need to be washed to get the clay dust off (shown here in the wheel barrow with L-R: Moses, James, Daniel, and Sando).