The workers brushing the land by the school foundation have been bantering with me that they need “cola nuts” to keep working hard. I remember back in October this same topic came up as I learned this was a tradition among laborers to receive cola nuts from the “boss man”.  They also told me they needed donuts (which women sell every morning on the streets of Gbarnga). Since I needed to run into Gbarnga this morning, I decided to kiss up to the work crew and satisfy both desires. I think I shocked two market women carrying clear plastic buckets of sugar donuts they were selling by pulling up next to them in the truck and purchasing every donut they had.  John 2 then led me through the back market area that I hadn’t explored yet in order to find cola nuts…then bought all the market woman had. When I arrived at the work site with cola nuts, the workers cheered…then cheered again as I pulled out a sugar donut from a plastic bag. The glory was fleeting but felt good for the moment…and everyone had smiles as they went about noshing and brushing.

I like my new driver, John 2, but he can be a bit aggressive with baby Foton…and there are a couple of driving pet peeves I have.  He “shakes” the steering wheel when going over bumps/potholes…he puts it in neutral and uses just the brakes to slow down the truck when carrying a heavy payload…for some reason he revs the engine between every gear change. I’m probably being petty but I guess I’m just missing my old driver Saah 😦

Since I’m such a perfect driver, I probably neglected to share the latest “incident” I had.  I was backing baby Foton into a parking space with the assistance of the lot security guard. He was waving me in while yelling everything was clear.  Next thing I hear is glass breaking as my passenger-side mirror (which extends far on this type of truck) scrapes against something protruding from the side of the building adjacent to my parking spot.  The plastic housing was in perfect condition so I showed it to John 2 when I returned to Gbarnga. He said he knew a “carpenter” who had a “glass cutting machine”…all we had to do was supply him the mirror and he’d cut it to fit. He dropped off a piece of mirror with $5 and the next morning we picked it up.  The mirror was in the plastic housing but…let’s just say I think his “glass cutting machine” is a beaver with diamond-studded teeth.  The guy said, “It needs a little glue to hold it in.”  Finding glue in Gbarnga is a trip. Is it “he and she glue”, “iron glue”, “shoe glue”, or “windshield glue”.  I found out the latter is actually silicone caulk…that’s what we needed but nobody had it except one shop.  The owner, Joe, had an open tube he had been using the previous day and let me squeeze some around the mirror perimeter for free.  I don’t think this broken mirror has brought me that much bad luck!

Back at the work site, the men have moved farther into the cassava farm to brush an open area for block making. I offered that some of the community members could come to “root” (aka “harvest”) any of the cassava plants as clearing work continued. My little friend, Moses, had his brother and mother working today.  They hauled about 5 sacks of free cassava back home. (To give you a sense of scale in this photo, the vertically oriented root at the photo’s center is about 12″ long). A number of workers took bags of them home, too. As some of the brush was burning, Moses and others were roasting cassava in the coals then enjoying it steaming hot. (FYI – Cassava is my new Kpelle word…”muh-NANG”.)

Back at the warehouse, some of the soil is being hauled out to level the sloping grounds and provide material for use with the new blockmaking machine.  While the workers were digging, they uncovered one of my most feared creatures…a scorpion.  I’m sure they’re as painful to be stung by as they are ugly to look at.  I didn’t realize you could find them underground. I adds a whole new level of adventure to digging! 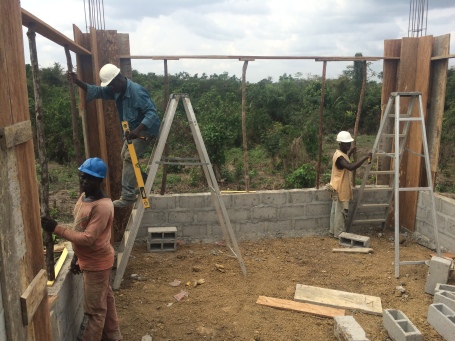 alls continue to rise on the guesthouse as wawa wooden forms are constructed to pour the various concrete pillars and lintels. The same sapling “poles” used for constructing scaffolding also provide support for the porch lintels when pouring the heavy concrete.

Foundation work also continues on the school in preparation for using the new blockmaking machine during training starting next week. I’m getting a little stressed out because I’ve had frequent email communication with Hydraform in South Africa regarding payments and coordinating the trainer coming in from Kenya.

I still don’t have his flight itinerary yet and I need to schedule a driver to pick him up at the airport, transport him to Gbarnga, is he coming Saturday or Sunday, etc.

I leave for Monrovia tomorrow morning around 6am to get more supplies at Eagle Electric then pick up James Woods at the LCL Compound. I’ve been trying to make lodging arrangements at Phebe and have had to call Mr. Saykor (Phebe administrator) then email Naomi (General Secretary of LCL in Monrovia) then have Naomi email Mr. Saykor…I still haven’t heard his stay has been approved but either way, he’s staying at my guesthouse since no one else is there (3 extra bedrooms are empty).