Once again, the day started with a surprise. I found out that the workers unloaded the truck until about 2:00 in the morning…with intermittent rain.

But what I didn’t fully understand until I drove down the access road was that the large flatbed truck was actually stuck sideways in someone’s vegetable farm. Apparently after being bogged down on the access road and deciding to retreat instead of advance all the way to our work site, the driver felt the best option was a 3-point turn over the squash farm.  Not a wise decision. They had spent a couple of hours in the middle of the night trying to free this beached behemoth. When I arrived the digging was still going on and every time the wheels turned, it just dug the tires deeper into the soil.

By blocking the access road, we couldn’t get baby FOTON past to help unload the remaining 150 cement bags still on the flatbed.  Saah tried driving around the right side (front of 18-wheeler cab) but didn’t make it all the way. He tried again without success. I wasn’t in favor of this and told him not to try again. The enthusiasm of youth trumped my command and he floored it only to make it half way, sliding down the embankment, and dragging the side 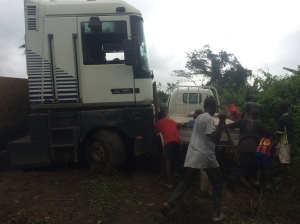 of my FOTON along the towing hitch protruding from the 18-wheeler cab. I was ready to scream! Accidents are one thing, but forewarned — and avoidable — crashes are another.  I had to walk away. They spent about 1/2 hour trying to force FOTON past the cab so it could be used to haul the remaining cement.  They finally did and the body damage was mostly cosmetic.

The fruitless efforts to dig out continued the ENTIRE day including digging trenches to drain water from low areas…I went back to Phebe at 5:30 and it was still unmoved.  I hope it’s gone in the morning.  I’ll need to compensate the farmer for her lost crops. 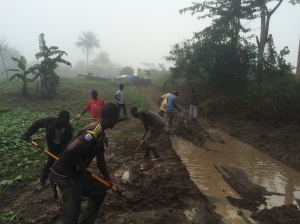 Fortunately I had my band of boys to cheer me up.

Some work actually got done today.

All 525 bags of cement made it neatly into the now fully weather-protected warehouse. The remaining welding was finished to fasten both steel doors in place.  They did the steel reinforcing grid and poured the concrete on the warehouse ramp.  Workers continued clearing land and stumps for the guesthouse and school foundations.