I got an email last night from a young man named, Philip Mckay, who saw me at the church service at St. Mark’s on Sunday. He wanted to meet to see how he could engage the youth of the community to help with the school project.  What?!?!? An unsolicited volunteer work force?  Philip was the representative from the youth organization at the groundbreaking that dug the shovel in the ground and said, “The youth will help in whatever way we can. We don’t have money, but we have strong backs and can dig.”  Well, here he is nearly 2 years later standing behind that commitment and taking the initiative to keep it.  I was very impressed. Turns out he works at Phebe in the County Health Offices (he’s responsible for all the statistics) and runs a community-based youth organization he founded in high school that is now a government recognized group called Bong County Awareness Program (BOCAP-Liberia).  He’s motivated and smart…we had an excellent conversation and discussed a variety of ways to engage youth.  He was enthused about the idea of night classes and brought up the significant need among the youth we see everywhere on motorcycles (most have no education and won’t attend school during the day since it’s prime time to earn money being a motorcycle taxi service).  He’s also worked in the prison (I just found out there’s a correctional facility in Gbarnga!).  Since he’s in community health, I discussed having an immunization clinic at the school prior to September (so all students are properly immunized as a prerequisite for entry).  Apparently the Liberian minimum vaccine requirements are pretty basic and not well documented.  He gave me contact info for approaching them in the future. Philip will be a strong supporter of the school and a great resource for understanding the needs of youth in the community.

Later in the morning I received an encouraging phone call from Sumo telling me that by late in the day I should be able to drive all the way to the property.  I couldn’t believe it.  No more discussion about compensation or paying for food.  I think my conversation with Bishop Seyenkulo had an effect. (Did I mention Bishop called to ask how things were progressing and I had to share my experience regarding volunteer compensation and food money requests?  He agreed completely that land clearing was communicated to everyone as their commitment to the partnership.  I think he made a few phone calls.) 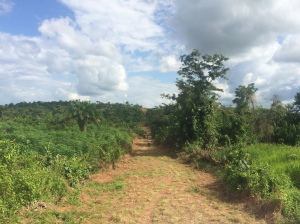 3:00 rolled around and I just had to visit the property!  I couldn’t believe it when I got there…the road was brushed and we drove right in from the Gbarnga Hwy, followed the homegrown gardens of squash, over the BRIDGE they made from palm tree logs spanning the gully, and right onto the property so see SEVENTY men, women, and children there working to clear the land.  (FYI- it’s 7 miles from Phebe to this newly brushed road and 1 1/2 miles into the property). It was a beautiful site!  I was so impressed with how much they had done over the last couple of days and how many people showed up. Men were chopping with their cutlasses, kids were moving brush, piles were being burned, and women were bringing drinking water. 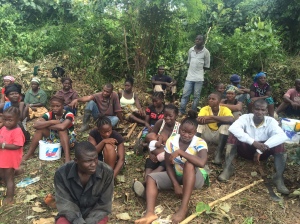 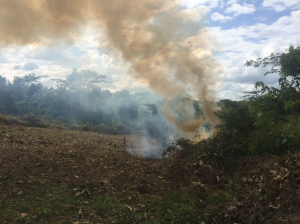 The land in that area actually has concrete boundary markers that have initials cast into them. There are several along the short end of the land (where the future town road will be) so I spent some time with them using mason’s string line to go from post to post. As I measured, I got a better feel for how huge 15 acres is.  I’m modifying the land design a bit because I want to use the lower corner for the permanent warehouse. We left and I had to make arrangements to get the “sticks” that will be used for making the temporary
“zinc” warehouse.

That was quite the trip. We met some villagers by the mission church (which I found out they call the “Deanville Church”) so we could drive into the bush where some men had cut the sticks. They loaded 130 pieces that really put this short-bed pickup to the test…those poles were long and quite heavy in total weight with 5 men sitting on the pile, too.  We had to put the 4WD in lowest gear at a few spots just to get up hills. Saah did a great job driving.  After getting back on the highway, down our property road, over the bridge, and up the hill to the site, they unloaded and we found the tailgate had b

ent from the weight…it wouldn’t close either. Saah took out the only tools he had (a car jack and lug wrench) and beat the bent sides of the tailgate and latches to make it shut.  I think we have a repair bill in our future!

One of the funny things about the new access road is that it emerges on Gbarnga Hwy right by a building that is under construction which looks just like the one in Pastor Schultz’s video “Let the Little Children Come”. Pastor says he just downloaded a picture from the internet to represent a school being built, but it looks a lot like this one. 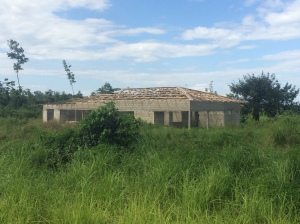 Construction begins tomorrow! I meet Sam at the property around 8am (he’s leaving Monrovia around 5am) and we’ll lay out the warehouse perimeter so his men can work while we go back to Monrovia to buy supplies.