Since today’s sermon at St. Mark’s wasn’t really a “sermon” (more on that later) I was thinking about 1 Corinthians 9:23…”I have become all things to all people so that by all possible means I might save some.”  Although the apostle Paul was thinking more in terms of adapting to a culture (like Liberia) as much as possible (without sinning) so that he could effectively share the Gospel, I see many Liberians “becoming all things to all people” in a different way.  If I were to blasphemously paraphrase this in the perspective I’ve seen it would sound something like this, “I’ll become anything to anyone so that by any possible means I might earn money or get a meal.” I’ll be a struggling tribal wood carver if that influences you to buy my African mask trinkets (even though I didn’t actually carve them)…I’ll become Christian or Muslim (even though I’m not a believer) so that you’ll let me attend your school or charge me reduced school fees…I’ll be your best friend if you let me carry your backpack or packages to your white air-conditioned four-wheel drive NGO truck (for a tip). If you’re poor and struggling to find money to support your family, the strategy is to make someone who has give to those who don’t–by all possible means.  Our challenge at the Gbarnga Lutheran Training Center will be to share the Gospel AND teach effective — and possible — means for earning a living.

Moving on to today’s worship at St. Mark’s and the “non message” sermon…  Bishop Seyenkulo was still in town so he was the guest speaker today.  He spent a good deal of time speaking about his two goals for the LCL as Bishop: 1) unity and 2) sustainability.  His message favored “sustainability” by discussing his vision for having parishes start large-scale farming of cash crops such as cassava (for making ethanol), cocoa plants, etc. with the profits going to support the church. I’ve got many questions about how that works….  The remainder of the time was more like a fundraising “auction” telethon where he actually announced specific amounts of money he wanted people to pledge (raise your hand if you will commit to $50 US per month…down to $10 LD per month).  A piece of paper was handed around for the donor to write their name, phone number, and amount so that he could follow up if they didn’t keep their “debt” payments.  Besides being very long (it went on until about 1:30), this was rather awkward for me to listen to.  I left before the service was over.  I’m not sure that was the best “message” for a Bishop to share with his “flock”.

After a long, hot, semi-service I decided to go out for lunch at the Passion Hotel up the road where I had enjoyed a chicken and french fries meal with some of my previous guesthouse-mates. But first I wanted to fill up with diesel at the only gas station for miles (otherwise you can buy fuel from roadside vendors who sell it in mayonnaise jars…it’s kind of like SPAM where you don’t really know the ingredients). One of the many joys of life in Liberia is that at any moment the gas station will just run out of fuel…for several days.  I tried on Friday also so I guess we’ll try again Monday.  Back to the Passion Hotel…The fries tasted awesome as I sat sipping a cold Pepsi on the open patio. When finished, I hopped into baby FOTON, turned the key, and nothing but rapid clicking…no engine turnover.  I tried again…the battery seemed fine, all electrical appeared to work, but no starting.  I was determined to not call Sam to rescue me yet again.  I didn’t want to get my church clothes greasy but I tried wiggling the battery terminals, lifting the truck cab to jiggle some wires leading to what could be a starter solenoid…not much invasive investigation given my good garments.  Well God puts certain people in your path at the right time.  Just yesterday on our way back from dropping off the brushing volunteers up north of Gbarnga (at Kerkula Farm), I man came running up to us begging to have us tow his crippled car back to Gbarnga (about 15 minute drive).  I agreed since he had an actual tow rope (not a seat belt!) and it wasn’t raining anymore.  We hooked him up and dropped him off at his auto repair shop (of all places!) across from CB Dunbar Hospital. He (Howard) was so appreciative that he gave me his number and said he would fix any car problems I ever have.  Well, today was the day to start!  I tried calling several times and his number immediately disconnected.  Mmm…did he give me the wrong number? My skeptical mind wondered if that was on purpose?

I decided to walk there since it was less than a mile.  The heat was making me sweat and I didn’t want my perspiration-ridden raiment to reek so I flagged down one of the bazillion motorcycle taxis. I think he drove extra cautiously given his withered white-man cargo and dropped me safely across from Howard’s repair shop.  I walked over and explained my predicament to two mechanics as Howard was off on Sundays. They knew of my apparent automotive altruism and got on a motorcycle to meet me back at the Passion.  I took another motorcycle back and paid both “cab” fares ($60LD…about 70 cents).

They brought an extra battery along as a precaution and began evaluating the patient. They popped the hood, jiggled some of the same previously-jiggled-by-Jon wires as well as the battery wires.  They went the next step to remove the mud-caked battery leads, clean the contacts, and reattach securely–SUCCESS!  It was just the effects of jungle mud on baby FOTON’s battery wires. That was both easy and practically free.

I got home grease-free in time to meet with the Gbarnga Rotary Club that was having a board meeting at a member’s home in Phebe Airstrip (it used to be an airstrip for missionaries who flew into Gbarnga on single engine planes but it’s now the name of a community).  Since I couldn’t navigate my way to the home via unnamed dirt paths between houses, someone met and escorted me (the Rotary “Sargent In Arms”, Charles).  I joined the already assembled group of Rotarians sitting in a circle outside the home and introduced myself.  They allowed me to share for the first 15 minutes about the school project partnership and how the grants will be used.  I took some questions and broached the possibility of me becoming a signatory on the grant account to make it easier on me as we disburse the funds.  They told me they’d discuss it and asked when I would become a member of their Rotary Club (which would make becoming a signatory simpler). Maybe I should become a Liberian Rotarian…would that make me a “Liber-tarian”? I left the meeting with another escort who brought me back to an abandoned pre-civil war (Liberian civil war…not 1800’s American) airplane from which I could make my way home independently.

At home, I met Bruce Moilan at the Phebe hospital offices because, among other things, he donated a laser printer that he offered me so I could print some updated drawings.  What a great connection.  He described how Global Health Ministries (he’s on their board) sends shipments at least 2x a year, sometimes 4x, and we could ship things in one of their containers right to Phebe–at no cost.  I’m definitely looking for ways to take advantage of that.  A recent shipment included wheel barrows for the Fosters who will be building another school starting in December. 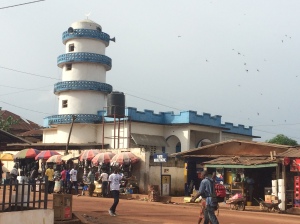 I mentioned Muslims at the beginning of this.  I’ve noticed much more of a Muslim presence than I recall during last year’s visit. There are at least 5 mosques from Phebe to Gbarnga (a 20 minute ride).  Gbarnga center has one right near the gas station (the blue building in the photos) and another at the north end of town (the yellow one).  Each morning you can see many little girls with hijab head scarves walking the streets to school adjacent to the mosques.  I think this influence will continue to grow in any developing country where people are searching for any way —all possible means— out of poverty and represents a challenge to us as we “spiritually compete” for the hearts and souls of our Liberian brothers and sisters.